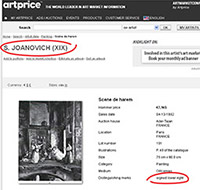 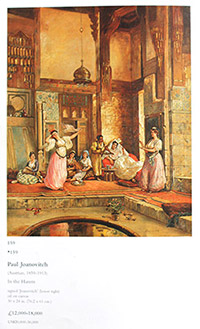 Caution ! Please ask the experts of our galleries and museums!

Recently in our daily newspaper Politika (02/10/2013.) an article entitled "A fake Šumanović sold at an auction" was published, which in the senior curator of the National Museum Ms. Ljubica Miljkovic says : "- First you need to inquire about the value of an artwork in your home country. In our case, the buyer had to contact the National Museum, the Museum of Contemporary Art or the gallery "Sava Šumanović " in Šid . "  And about how it is possible that the famous auction houses do not check thoroughly the artworks that they offer to buyers the curator Nikola Kusovac says : - If the buyer of the painting by Šumanović was to address us we would have written that it is not an original and reputable auction houses would have immediately returned him the money from the sale of such a work. They are very professional and they return back money.

Keeping track our artists’ works, which are sold at auctions around the world, we have noticed something similar, no less threatening for  the buyer.

We wonder whether the buyer of the painting Scene de Harem knew that he was purchasing the work by Svetislav Jovanović , the brother of Paja Jovanović?
We do not exactly understand how the same painting appeared later and was sold as a work of Paja Jovanović.

This work continues to appear at auctions around the world and, of course, its price is higher each time.
Would it be if the buyers would know who the author is? Or maybe are we mistaken? Perhaps the brothers painted the same and gave their works the same name?

In any case, if you are buying it, please ask! Let our experts judge whether it is Svetislav or Paja Jovanović! 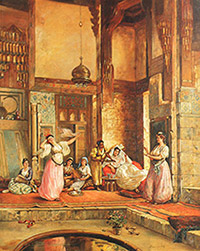 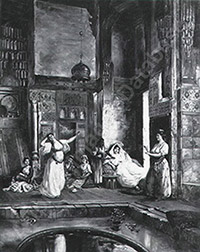 If we compare painting and sculpture in Serbia, we find that sculpture has a completely different history. As a matter of fact, sculpture did not even exist up to the first half of the 19th century.  One of the reasons being the attitude of the Orthodox church which did not permit sculptural presentations of saints, Bible scenes and other religious themes.

This fact was actually the biggest handicap and the usual comment, which was very often used later  when sculpture in Serbia already existed, when worthy pieces were being made, and when sculpture needed support instead of hindrance by referring to long gone times. Sculpture in Serbia was born with Ubavkić (1852-1910), Đoka Jovanović (1861-1953)and Simeon Roksandić (1874-1943). However, Croats Franges-Mihanović and Rudlof Valdec also worked in Serbia and their sculptures - public ones and (or)monuments can be found at the New Cemetery. Especially the third and fourth decade of the last century brought important changes and innovations. A dynamic scene already characterizes this period, however, after 1950 an important conceptual break-through occurred: a new age of Serbian sculpture was born.

A short period of social realism or better-said socially engaged realism was “smashed” by post-graduate students from the workshop of Toma Roksandić. Most of them were women sculptresses who received true affirmation in Serbian contemporary art history only in the 21st century, even though some of them received international affirmation during their life time. However, a number of great professors of this generation, such as Sreten Stojanović, Burdel’s student, should not be forgotten.

Nowadays it is totally irrelevant what was going on with sculpture in Serbia in the Middle Ages or in the 18th century. The art scene shows a brilliant generations of sculptors. Olga Jevrić did not need the medieval tradition in order to show immanent strenght, viciousness and bitterness of the region (of the Balkans) where she created her art. Likewise, neither did Ana Beslić need the previous centuries for her “native sculpture”. Today’s contemporary scene is based on these foundations despite insufficient social support, lack of collectors of art works which could finance this expensive art form, both time-wise and material-wise. Great works of art were produced by persistent and creative artists supported by a few sculptor colonies and symposiums. Of the two most important ones the Aranđelovac symposium “White Marble”, with a first-class sculpture collection is not active today, and the International Symposium “Terra” in Kikinda, an important point on the cultural map of Europe is still active, despite insufficient state support.